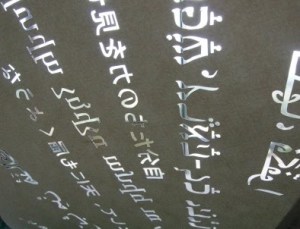 The time has come, the Walrus said, to talk of many things. Of arts careers and grants and stuff, and artists’ residencies. Yes, it’s that time of year again: the alert from the Bundanon Trust fell into my inbox earlier in the week and in between caring for a sick daughter (just a nasty cold) and packing in the hours in the studio (‘cos it’s far too wet to be thinking of gardening) I’ve been ruminating about the whole artists’ career thing.

Do they tell you all about the arts career ladder at art school? I didn’t go, so I have no idea. I guess even if not, you probably get an idea what happens by interacting with your contemporaries, watching your predecessors and reading the arts press. I’ve done much the same thing: paid attention to names at exhibitions and in various art magazines, looked at prize winners and generally listened out. I deduce that there comes a point when you are expected to start applying for and getting grants and residencies in order to climb up to the next rung, and I think I’m close to that stage. I’ve exhibited regularly in several countries and taken part in various collaborative projects. I’ve sent my work here, there and everywhere and apparently some people now know who I am when they see my name. I don’t have gallery representation – to be honest I’ve not even tried, and don’t know if it is what I would want – but I really really would like to do a residency.

Why a residency? In a domestic sense it’s a way of escaping normal life for a while and focusing completely on your art. That sounds a bit like I’ve had enough of doing the washing up and would like a holiday paid for by someone else, but dreams of lottery winnings aside, it’s not quite like that. Making art is like being part of a constant tug-o-war, constructing a meaningful space around the interior life that feeds your art while juggling the demands of everyday. It is an essentially selfish activity, and I feel constantly compromised. The muse rarely decides to communicate with me while I’m settled in the studio… instead it sneaks up on me at all hours of the day and night, invading my relationships, demanding attention while I’m trying to attend to other people, delivering great must-do-right-now ideas when I’m at work on other things. I am hardly unique in this, it must be the plaint of artists through history. But the lure of a residency for me is partly the allure of dedicated time in which to be completely selfish about making art.

It is also the allure of being part of something bigger: residencies give a glimpse of other lives and new possibilities, they connect you with new people who – perhaps – understand what you’re talking about. There is a chance to get involved with collaborative work or artistic exchange, and the chance to make friends and talk. It seems to me that residencies have the power to accelerate your progress by presenting challenges and opportunities at a point when you are separated from the ‘no’-ness of normal life.

If I apply for the Bundanon Trust residencies again this year (note the “if”) it will be my third or fourth attempt. My poor atrophied brain cells can’t remember. Is it worth the attempt? I think the statistic of “1 in 4” applications accepted is bandied around somewhere on the blurb or the website, but I wonder whether in reality the odds are stacked. I’d always been quite optimistic about applying… until I read an article by Deborah Ely, the CEO of the Bundanon Trust, in the March 2011 NAVA Quarterly magazine in which she said that “the residency program is premised upon the seriousness and calibre of selected artists” and “the majority of artists have visible careers nationally and/or internationally”. Oh dear. Possibly a big profile in Coffs Harbour isn’t visible or serious enough…

Another residency opportunity popped into my inbox last night, from Asialink which is administered by the University of Melbourne. About 40 Australian artists are placed in various Asian countries each year, and the programme sounds fabulous. I’ve talked to dearest husband about the possibility – wildly unlikely! – that I might be off to Malaysia for a couple of months next year and he was very cool about the whole thing: it’s probably manageable as long as he and darling daughter could come over for a week or so in the middle, which is fine by me. But again, how likely is it? Answer: not very.

From a funder’s point of view it obviously makes sense to poke money at young, energetic, up-and-coming artists who are all into cutting edge/inter-disciplinary/contemporary art making. They’ve got years ahead of them in which to make their mark on the art world and for their resume to trumpet the inspired confidence of an early grant-maker or residency organisation. I find myself rather glumly surveying my own prospects: gallery representation? Not likely in the near future, I think. Big competition win? It would help if I’d entered a big competition recently! Long career ahead of me? Yes, it’s possible; artists don’t exactly have a retirement date in mind since making art is as much about who they are as how they work. Residency? Well it would be nice to think so. I remember a crucial meeting with a large philanthropic organisation when I was Chair of Spike Island Printmakers in Bristol a few years ago. We had applied for a large grant to enable us to appoint a Director who could take us off into the bright blue yonder, but we were head-to-head with several other worthy applicants when the CEO came to visit me for a chat. Why, she asked me, should they give the money to us? And my reply was that everything starts with one person taking a leap of faith and investing in us: without that element of risk taking we would never have a chance to prove ourselves worthy. Once one trust or person made that leap, others would follow (if we managed the money sensibly) and we would shine. So she did. Fingers crossed that at some point the same will happen for me.

A blog to discuss the features, developments and outcomes of the Dūcere and University of Canberra's MBA - Innovation and Leadership

The Last Word On Nothing